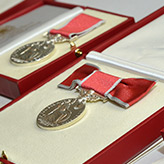 At a lunchtime ceremony, held on Tuesday 13 October in the splendour of Bowcliffe Hall, the Lord-Lieutenant of West Yorkshire, Dr Ingrid Roscoe, presented honours awards to deserving members of the public.

The awards were announced in the Queen’s Birthday Honours List and included eight members of the public from the county, who received the British Empire Medal.

The British Empire Medal (BEM) rewards a sustained, local contribution or innovative, high-impact work in the community. The recipients were (in alphabetical order):

“I never cease to be amazed by the self-sacrifice shown by our Honours award-winners,” said Dr Roscoe. “The award of the British Empire Medal is not just a fitting tribute to them all, but is also much deserved.

“The nominations for the British Empire Medal are subject to a rigorous process before the decoration is given and to hear the award citations of those attending today is truly inspirational.”