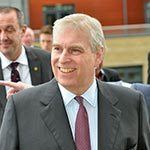 The Patron of the Yorkshire Air Ambulance (YAA), HRH The Duke of York, KG, pledged his wholehearted support to the “outstanding service” provided by the charity.

The visit, on Thursday 26 March, 2015, to the air support unit was the first of the day for His Royal Highness, who went on to present The Duke of York Young Entrepreneur Awards, hosted and organised by the University of Huddersfield.

The Duke, a former naval helicopter pilot and instructor, was invited to officially open the new Nostell Air Support Unit. His Royal Highness toured the purpose-developed unit in the grounds of the Nostell Estate and met YAA crew, paramedics, supporters and staff. 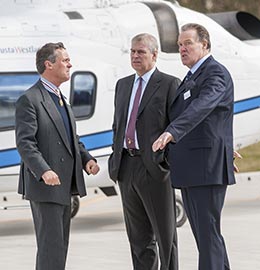 The Air Ambulance service relocated from its previous base at Leeds Bradford International Airport in November 2013 to improve coverage and response times to patients in the West and South of the county. Nostell also boasts a larger helicopter hangar space, overnight crew facilities, a dedicated fuel bowser, helipad and improved office and crew facilities.

Since its inception in 2000, nearly 6,000 patients have been carried to relevant treatment centres. The YAA operates two helicopters from the Nostell Air Support Unit, near Wakefield, and from RAF Topcliffe, near Thirsk. The service is operational 365 days a year and, as an independent charity, needs to raise £9,990 per day to keep both air ambulances in the air and maintained.

The Duke praised the work of the service: “Thank you for the service you give, because it means so much to the people of Yorkshire. I am sure they will continue to give as generously as they have done in the past and support this service, which is working on a day-to-day basis to deliver care across the county. You can be assured of my wholehearted support because I believe totally in this outstanding service.” 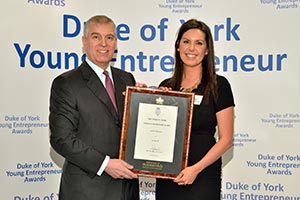 The event marks the third presentation of the awards by His Royal Highness, who is committed to the encouragement of enterprise and entrepreneurship amongst young people across the country.

Following the presentation to the prize-winners, The Duke stressed the importance of young people acquiring digital skills, especially computer coding. He also spoke of the need to “create the conditions in which small businesses could grow” and he praised the support provided at a centre for entrepreneurs that bears his name.

As well as chatting to the award-winners, His Royal Highness also toured and met more young entrepreneurs in the Centre. His Royal Highness concluded his visit by unveiling the foundation stone for the University’s new £27.5 million building, which will be home to the Law School and the School of Music, Humanities and Media.