Presentation of Honours Awards May 2015 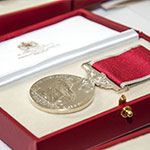 At a lunchtime ceremony, held on Tuesday 5 May at Bowcliffe Hall’s new conference and events centre, the Blackburn Wing, the Lord-Lieutenant of West Yorkshire, Dr Ingrid Roscoe, presented honours awards to deserving members of the public.

The awards were announced in the Queen’s Birthday Honours List and included five members of the public from the county, who received the British Empire Medal.

The British Empire Medal (BEM) rewards a sustained, local contribution or innovative, high-impact work in the community. The recipients were (in alphabetical order):

“The people who will receive their British Empire Medals today are a credit to their communities and to the organisations they represent,” said Dr Roscoe. “Their determination and their sheer hard work is an example to us all.

“Members of the public nominated the people here today and these nominations are subject to a rigorous process before an award is given. I have read all the citations myself and I was considerably moved by what I read and by the selfless commitment that you have shown to the benefit of others. Congratulations to you all.”