Textiles and trombones for The Princess Royal 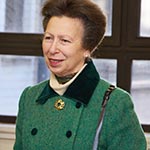 On Tuesday 24 February, 2015, the County again welcomed HRH The Princess Royal, just one month after her previous visit, when she was received by three companies that have become leaders in their respective fields.

Luxury textile manufacturers James Hare and Wyedean can both trace their textile heritage back 150 years and the trombone manufacturers Michael Rath Brass Musical Instruments are a household name in the brass world. 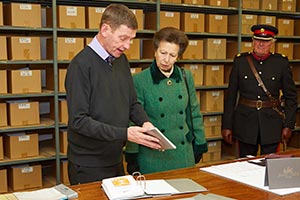 Her Royal Highness started her day in the appropriate surroundings of Monarch House, in Leeds, home to textile manufacturers James Hare. The company, which was started in 1865, is today Britain’s leading silk specialist and is still owned and run by the Hare family. The company specialises in silk textiles for fashion and interiors and sells into over 40 countries worldwide.

The Princess Royal unveiled a plaque to celebrate the company’s 150th anniversary and received a gift of James Hare dress fabric, Connaught Silk, Bali. Her Royal Highness was accompanied on her visit by Saffron and Charlie Hare, the great great grandchildren of the founder. 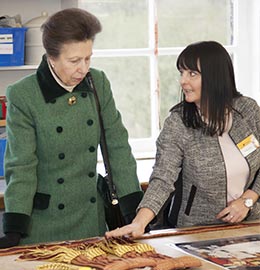 As colonel-in-chief to a number of regiments, Her Royal Highness is no stranger to the dress uniform and her second visit of the day was to specialist textile manufacturers Wyedean. The company, based in Haworth, draws on a long history of designing, manufacturing and supplying uniform regalia, accoutrement and insignia to the armed forces and other organisations the world over. Its clients include the army, navy and air force, the police, the fire service, Savile Row tailors and even the United Nations.

The Royal Visit coincided with the company’s first overseas exhibition to promote its export trade at the International Defence Exhibition in Abu Dhabi. Its displays included a serving member in his full ceremonial dress from The Household Cavalry, The Blues and Royals, of which Her Royal Highness is the Regiment’s Colonel. After a tour of the factory, The Princess Royal unveiled a plaque in recognition of her visit and in celebration of Wyedean’s 50 years of manufacturing in Haworth. 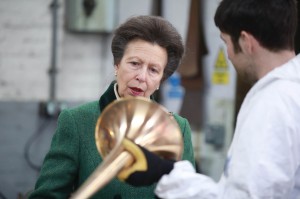 Honley-based trombone makers Michael Rath Brass Musical Instruments is famous in the brass instrument world and numbers many of the leading players among its client list. The company was started by owner Michael Rath in 1996 and has the honour of being the only trombone maker in the UK.

The Princess Royal was shown the intricacies of the manufacturing process, which simply starts as sheets of brass and is carefully crafted by the company’s 10-strong workforce into a range of trombones including many bespoke commissions. The company makes approximately 450 instruments a year, many to order, and each instrument can take up to 70 hours to complete. As a token of thanks for her visit, the company made and presented Her Royal Highness with a small brass hunting horn.