A busy two days for The Princess Royal 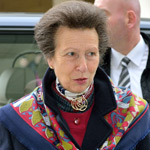 HER Royal Highness The Princess Royal spent a busy two days in West Yorkshire at a variety of organisations.

On Thursday 22 January, Her Royal Highness attended a reception to celebrate the success of Project SEARCH at Bradford Royal Infirmary, spent time with carers, volunteers, trustees, staff and supporters at the Carers’ Resource Bradford office and presented a Queen’s Award to CMB Engineering.

On Friday 23 January, The Princess Royal visited the HM Prison New Hall at Flockton, before opening the new Student Central building at the University of Huddersfield, then concluding her visit with a tour of Huddersfield-based SKA Textiles. 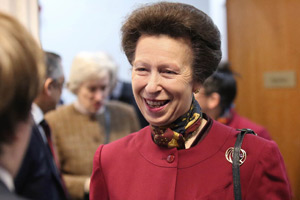 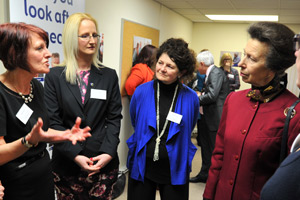 The Carers’ Resource is the local, specialist carers’ centre for the Bradford and Airedale, Harrogate and Ripon and Craven districts of Yorkshire. The Princess Royal, as President of Carers Trust, spent time talking to carers, volunteers, trustees, staff and supporters on her visit to the Carers’ Resource Bradford office. Her Royal Highness, who started an initiative in 1991 which led to the creation of the Carers Trust, was particularly pleased to be invited to the reception and spoke with empathy about carers and their unique situation. 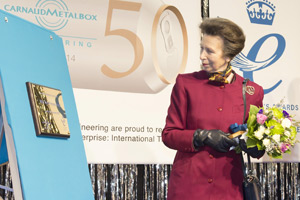 The Princess Royal concluded her first day by presenting the Queen’s Award for International Trade to Shipley-based engineering company CMB Engineering. This is the third time that CMB has received the prestigious award and the second time in the International Trade Category. CMB Engineering is a market leader in the design, development and manufacture of canmaking equipment with a pedigree dating back to the 1930s. Today, the company supplies equipment to a wide range of customers on six continents.

On day two of her visit to the county, Her Royal Highness spent much of the morning visiting HM Prison New Hall, which is situated near the village of Flockton, between Huddersfield and Wakefield. New Hall was originally used as a satellite prison for HMP Wakefield for men near the end of their sentence. Today, it is a closed female local prison, which holds adult female prisoners of all categories and Young Offenders and Juveniles on Detention and Training Orders. The Princess Royal is the Patron of The Butler Trust, a charity which promotes excellence in prisons, probation and youth justice. 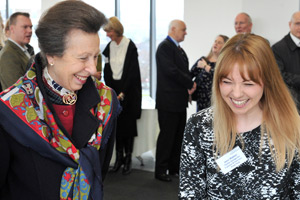 Fashion was the feature of the remaining two stops for Her Royal Highness, firstly, when she met the next generation of fashion and textile designers at the University of Huddersfield. Her Royal Highness chatted at length with the student designers and met representatives from of the Huddersfield Textile Society and from the Worshipful Company of Woolmen. The Princess Royal also officially opened the University’s new £22.5 million Student Central building. As well as providing state-of-the-art sports facilities, Student Central also offers a one-stop facility for student support. This includes careers services, wellbeing and disability services, an advice centre for the University’s 3,000 international students, a variety of food outlets and library and IT facilities nearby. It is regarded as a showcase facility within the Higher Education sector. 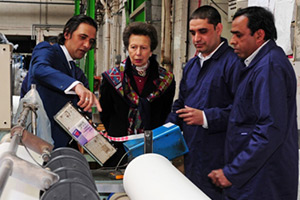 The Longroyd Bridge premises of SKA Textiles were the final destination of the Royal visitor for the celebration of the Huddersfield company’s 40th anniversary. Her Royal Highness unveiled a plaque to commemorate the occasion and was shown a timeline charting the company’s history. The company manufactures knitted fabrics for some of the big names on the high street, including fashion retailers Arcadia Group, Debenhams, Wallis and Marks and Spencer, and has invested over a £1 million in its operation to create one of the “longest and widest” finishing lines in Europe.