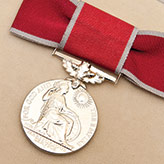 At a lunchtime ceremony, held on Monday 13 October at Bowcliffe Hall, the Lord-Lieutenant of West Yorkshire, Dr Ingrid Roscoe, presented honours awards to deserving members of the public.

The awards were announced in the Queen’s Birthday Honours List and included 17 members of the public in the county, who received the British Empire Medal.

The British Empire Medal (BEM) rewards a sustained, local contribution or innovative, high-impact work in the community and, on the day, the Lord-Lieutenant presented the award to 16 of the 17 recipients from the region.

The recipients of the British Empire Medal were (in alphabetical order):

“Members of the public nominated the people here today,” said Dr Roscoe, “and these nominations are subject to a rigorous process before an award is given. I read all the citations myself and I was considerably moved by what I read. Your tireless effort in your voluntary giving has made a huge impact in the community and has improved the quality of life for so many people.”