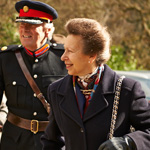 HER Royal Highness The Princess Royal enjoyed a varied day in the county with visits on behalf of three organisations that share her patronage and support.

The three were The Butler Trust, who welcomed Her Royal Highness to the West Yorkshire Probation Trust in Wakefield; the WISE Campaign who held a Student Colloquium at the University of Huddersfield; and the Wooden Spoon Society, who organised the first visit of the day in Bingley at the Riverside Riding for the Disabled Association. 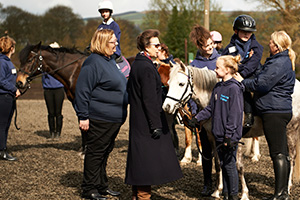 Well known for her love of horses, The Princess Royal is an expert horsewoman and has held the position of President for the Riding for the Disabled Association (RDA) from her appointment in 1969. The first visit of the day for Her Royal Highness was to the Riverside RDA in Bingley to open a new stable block at their base at Ravensroyd Farm.

As well as touring the new the yard, the Mechanical Horse Room and the new stable block, Her Royal Highness joined a hundred guests to watch five riders demonstrate a range of abilities and activities. The visit culminated with the Royal Visitor meeting the riders and their horses and presenting a number of rosettes, before unveiling a commemorative plaque. 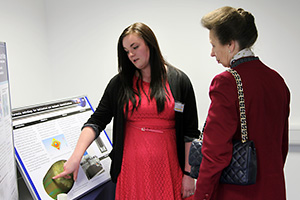 Her Royal Highness then travelled to the University of Huddersfield to meet the next generation of women scientists and engineers at the WISE Student Colloquium. The Colloquium was staged by the WISE Campaign, which has a mission to improve gender balance in the UK’s Science, Technology, Engineering and Mathematics, or STEM workforce. The goal is to increase the proportion of female employees to 30% by the year 2020.

As Patron of WISE, The Princess Royal met some of the student doctoral delegates who explained their current research and also spent time with representatives of the many organisations that attended the event. Her Royal Highness then addressed the Colloquium praising the work of the WISE Campaign and urging the students to follow their studies into STEM careers. 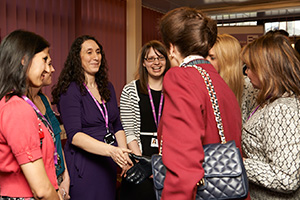 The afternoon saw Her Royal Highness visit the West Yorkshire Probation Trust organised by The Butler Trust, a charity which promotes excellence in prisons, probation and youth justice. In 2014, the West Yorkshire Probation Trust won three Butler Trust awards on the back of an award and two commendations in 2013 and, in her capacity as Patron of The Butler Trust, Her Royal Highness was introduced to all the winners.

They were, in 2014, Lisa Tedstill and Melva Burton from Circles of Support and Accountability in Leeds for their work in supporting sex offenders in the community; Janet Carter from HM Courts Service, Mark Siddall and Liz Mills for developing a unique approach to sentencing and rehabilitating offenders; Matthew Ashworth for his success with young burglars in Leeds; and 2013 winner Steven Ellis for his work in supporting offenders. The Princess Royal also met 2013 commendation winners Kate Brooksbank, for her work in restorative justice, and Debbie Addlestone, Michelle Costello, Sukbinder Rai and Kim Day for their Positive Futures initiative at Leeds Prison.