Commemoration of the commencement of the First World War 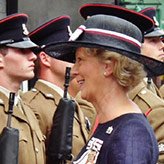 Since so many young men from the old West Riding volunteered to join Regiments from this area in 1914 in the cause of patriotism and for the protection of family and friends, it has been decided to mark this brave and tragic moment in Leeds on Saturday 26 July. We hope that people from all over the county will want either to watch the parade and march-past or come to Leeds Minster (formerly Leeds Parish Church) for the service afterwards.

The parade of 500 strong will take place on Millennium Square in the city and will include the descendants of notable West Riding Regiments such as the King’s Own Yorkshire Light Infantry (KOYLI), the Duke of Wellington’s Regiment and the Prince of Wales Own Regiment of Yorkshire, among others. All will be ably represented on parade by 269 Battery Royal Artillery, The Rifles Regiment, 4Bn the Yorkshire Regiment, 150 Transport Regiment, 4 Bn the Parachute Regiment, 299 Parachute Squadron Royal Engineers, KOYLI Officers’ Club, Elizabeth Cross holders, and veterans from past and recent conflicts. Also on parade will be Association members from the Leeds Rifles, KOYLI, the Light Infantry, the Parachute Regiment, and other Yorkshire Regiments. Some 140 Officer Cadets from the three Services and members of the Royal British Legion will also parade. The band of the Yorkshire Volunteers will play throughout the parade and subsequent march down to the Minster.

The scheduled route and timings are as follows:

Photography from the parade can be viewed in the Lieutenancy Events section.