The Princess Royal’s warm welcome in Leeds and Bradford 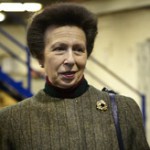 HER Royal Highness The Princess Royal was welcomed again to the county on Tuesday 14 January. Her Royal Highness was escorted on the day by Deputy Lieutenant Michael Fox and she visited educational and sporting facilities in Leeds followed by tours of contrasting businesses in Shipley, Bradford. 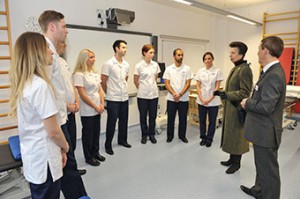 The Princess Royal is Patron of the College of Occupational Therapists and in this role she was delighted to attend a conference at Leeds Metropolitan University, which was organised by occupational therapy and physiotherapy students. As well as a tour of the recently-installed Clinical Skills Suite, Her Royal Highness met current students before delivering a speech at the conference, which took place in the University’s Rose Bowl building. 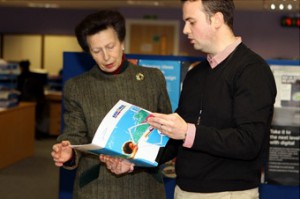 Her Royal Highness is also Patron of the organisation Sports Coach UK, a charity which aims to widen participation in sport by ensuring the recruitment and development of coaches. The organisation is based at Armley in Leeds and this was the next destination for the Princess Royal. The charity support a range of partners to recruit, develop and retain the coaches required to achieve their sports participation and performance goals. 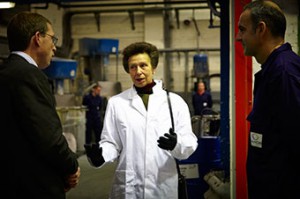 Her Royal Highness then travelled to Shipley in Bradford, where the family-run business Manor Coatings is marking its 75th anniversary. The company was founded as The Shipley Paint and Varnish Company by Thomas Raymond Smith in 1938. Today, the business is in the third generation of his family, but it still proudly boasts Mr Smith’s guiding principles of product quality, value for money and customer service. 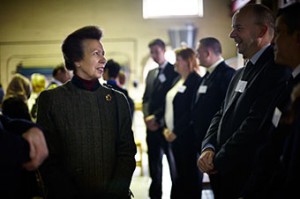 Her Royal Highness remained in Shipley when she visited a much more recent enterprise, Saltaire Brewery, which was founded in 2005. The Princess Royal opened new fermentation facilities that will increase production by 30 percent. To mark the Royal visit, a special Celebration Ale was brewed. It was described by the brewery as a “quintessentially English strong golden ale with hints of malt sweetness balanced by a blend of four English hops”. After Her Royal Highness had unveiled a commemorative plaque, she was presented with samples of the special beer.