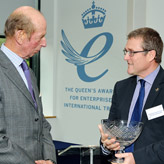 His Royal Highness The Duke of Kent, who served as the UK’s special representative for international trade, presented awards on behalf of Her Majesty The Queen. As part of his trip to Kirklees, His Royal Highness also visited two new complexes – one at Greenhead College and the second at the Woodland Court community housing complex. 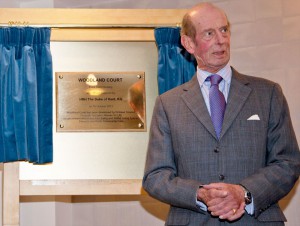 His Royal Highness started the day by presenting the Queen’s Award for Enterprise to Millers Oils, a 126-year-old firm, which develops engine oils and lubricants. The firm, which employs 85 people at its Brighouse site, recently opened a £500,000 research and development centre. His Royal Highness toured the Centre and was shown how the company is working to reduce friction in oil to increase engine power. 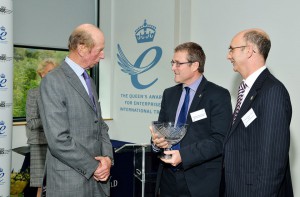 His second visit of the day was to the University of Huddersfield’s impressive 3M Buckley Innovation Centre where he presented two more Queen’s Awards for Enterprise. Professor Liz Towns-Andrews received the Queen’s Award for Enterprise Promotion whilst Professor Dave Taylor and Professor Chris Cowton jointly accepted the Queen’s Award for Enterprise in International Trade on behalf of the University. His Royal Highness was welcomed to the University by the Vice-Chancellor, Professor Bob Cryan, and had lunch with invited business leaders. In the afternoon, The Duke of Kent visited Huddersfield’s Greenhead College to officially open its new £2.5m Rostron Building. The building, which houses four science labs and 16 classrooms, will focus on the subjects of Physics, Biology and Mathematics. The building was named in honour of Martin Rostron, who retired as Principal earlier this year after 22 years at the College.

His Royal Highness ended his visit to the district in Dewsbury where he opened a new sheltered apartments complex. Woodland Court, a partnership between Kirklees Council and Regenter Excellent Homes for Life, has 46 rented apartments with on-site, 24-hour-a-day care and shared facilities. The Duke of Kent toured the complex and met residents. The complex, known as Extra Care Housing, is aimed at keeping frail and vulnerable over 55-year-olds in their own homes. Woodland Court opened in July this year and is the first of three such schemes planned by Kirklees Council.