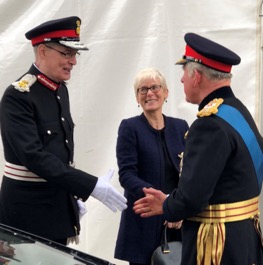 HRH The Prince of Wales was greeted by the new Lord Lieutenant of West Yorkshire, Mr Ed Anderson, and his wife, Her Honour Judge Heather Anderson, during a visit to Bramham Park on 22 September 2018 to present the Regimental Guidon to the Queen’s Own Yeomanry. The presentation of a Regimental Guidon is one of the most important accolades the Sovereign can bestow upon one of Her Regiments and it is presented in recognition of past, present and future loyalty to the Crown, and service to the Country. 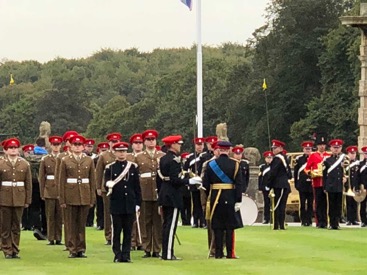 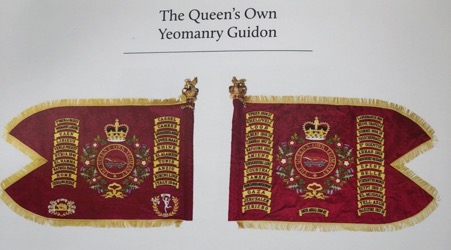 The first use of a Guidon by the British Cavalry is not known, but the name is believed to derive from the French Cavalry emblem in the 17th century. The word Guidon is a corruption of the French guyde homme – ‘the guide man’. The Queen’s Own Yeomanry Guidon is of crimson silk damask embroidered and fringed with gold. The Guidon is carried on a pike surmounted by the Royal Crest. The Badge of the Queen’s Own Yeomanry is borne on both sides within a circlet bearing the title of the Regiment. The badge appears as a stalking Vixen, below a scroll inscribed ‘Queen’s Own Yeomanry’. The whole is within the Union wreath of flowering Rose, Thistle and Shamrock surmounted by the Royal Crown.