The Duke of York meets students of all ages in Huddersfield 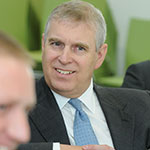 HIS Royal Highness The Duke of York, KG, spent an enjoyable day visiting three levels of education in Huddersfield.

At Primary level His Royal Highness was welcomed by the children at the St Thomas CE (VC) Primary School, then the Royal Visitor travelled across the town to the newly-built Kirklees Council, before concluding his time in the county at the University of Huddersfield where he presented The Duke of York Young Entrepreneur Awards. 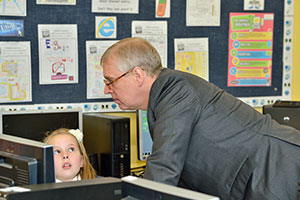 In partnership with students from the University of Huddersfield, children at the St Thomas CE (VC) Primary School have been involved in a computer coding project, which saw some of the older children learning how ‘to code’. His Royal Highness spent much time talking to the children about their new-found coding skills. The children had been working on a ‘fruit machine’-style game, developed by the Coding Club – a national initiative to support the development of computer programming skills in primary education. His Royal Highness showed great interest in the children’s work and was impressed by their understanding and competence.

Throughout the visit His Royal Highness engaged in cheerful conversation with the children, aged from three to eleven years of age, who lined the schools halls. Many of the youngsters were overwhelmed by having a Royal Visitor at their school. 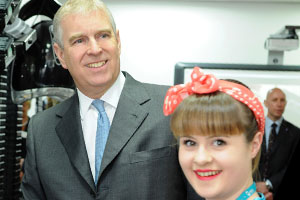 Kirklees College is one of the top 20 largest colleges in the country with over 20,000 students and approximately 1,200 staff. The College recently took up residence in its new £74 million new Huddersfield Centre and The Duke of York officially opened the new facility. The College took the opportunity to highlight its work with employers, specifically in the fields of hair and beauty, construction, health and social care, hospitality and catering, and engineering. His Royal Highness met apprentices, students, staff and local employers in a tour of the new facilities.

From September, Kirklees College will be the only college in West Yorkshire to offer the Peter Jones Enterprise Academy programme. Students on the programme benefit from 50% of their time being mentored by an employer and 50% of their time learning about business planning, budgeting, marketing, product development and much more in college. His Royal Highness met a number of applicants for the programme as well as other students that had successfully started their own businesses. 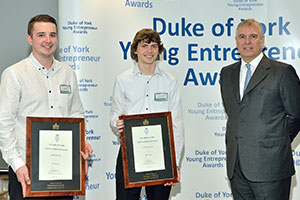 The Duke of York Young Entrepreneur Awards were presented for the first time in 2013 and the University of Huddersfield was delighted to host the awards ceremony for the second year running. The awards are given to young people, comprising both current students and graduates, to mark the success of their respective start-up businesses. The ten businesses, created and pioneered by the young entrepreneurs, were chosen to represent each of the ten universities in Yorkshire. The presentation took place at the 3M Buckley Innovation Centre at the University of Huddersfield, where His Royal Highness is Patron.

The Royal Visitor was welcomed to the campus by the University’s Vice-Chancellor, Professor Bob Cryan. “The University of Huddersfield places entrepreneurship, innovation and business engagement at the heart of its mission and this enthusiasm is echoed by His Royal Highness,” said Professor Cryan. “This will be a special day for the young people who received awards and we were delighted to welcome His Royal Highness to the campus, as our Patron, to present them.”