ON her latest visit to West Yorkshire, the Princess Royal witnessed many aspects of the region’s industrial heritage – past, present and future.

Centrepiece of the tour, which took place on 23 July, was the National Coal Mining Museum, at Caphouse Colliery, near Wakefield. The museum is marking its 25th anniversary and has made a major investment in an extension to its popular underground tour.

The Princess spent two hours at the museum and went underground herself to take an in-depth look at the new facilities. Back on the surface, the famous Royal horsewoman, who competed in the Olympics, was introduced to the museum’s pit ponies, Eric and Ernie, plus Finn, the giant Clydesdale. 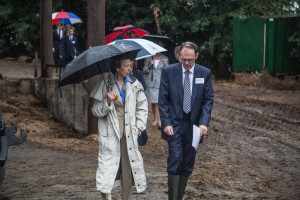 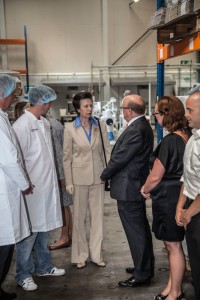 The Princess Royal’s West Yorkshire excursion also took her to an innovative bio fuel farm, the Clayton Hall Farm at Clayton West, Huddersfield, where farmer Neil Gemmel has built a 400 kW-capacity generating plant on his farm to convert food waste into electricity, which creates enough electricity to power 650 homes.

She also visited The Candy Makers, a go-ahead sweet factory in Beeston, Leeds. It is one of the first confectionary firms in the UK to make sugar free Halal sweets and is enjoying export success.

The birth of Prince George was in the news during the Princess Royal’s visit and the new great auntie expressed her delight when quizzed by members of the public.