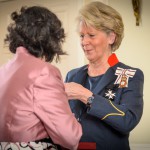 The grandeur of the historic Bowcliffe Hall was fitting for the honour bestowed upon the six recipients. Of the hundreds of nominees, only six individuals from the West Yorkshire region were chosen to receive medals.

They were: Mrs Marlene Chambers, who received her award for services to the community in the Dewsbury area of West Yorkshire; Mrs Joyce Fieldhouse, who has been awarded with the British Empire Medal for her volunteer work with Leeds Mencap and for her services working with people with learning difficulties and their families; Mrs Patricia Hampshire, who has given over 35 years of continuous service to Riding for the Disabled; Miss Natasha Pearson, aged just 26, who, whilst a student at Sheffield Hallam University, set up a project called ‘Shine and Smile’, with the aim of breaking down social barriers between special education and mainstream school children; Mrs Ann Lesley Priestman, who over the last 20 years has devoted her time and expertise to helping a huge diversity of projects in the village of Shelley; and Mrs Joan Villiers – a teacher by profession – who has continually contributed to her community in a number of ways since 1975, including youth work, sport and health research, education and charity.

The BEM is awarded for meritorious civil or military service worthy of recognition by the crown. Each of the six women has sacrificed their time and offered their expertise to those who need it and each has made a substantial impact in various ways.

The Lord Lieutenant spoke of her admiration for the recipients: “I’m more moved than I can tell you. I knew these were fine people, but the extent of their giving overwhelms me entirely. Each of the recipients are equally worthy of the award, they have all helped their communities through various different means, by fundraising, volunteering, charity work or helping disabled people. They have changed their communities for the better; we can only hope more people strive to help others to the extent that these six women have.”

One of the recipients, Miss Natasha Pearson spoke of how honoured she was to receive the award: “It’s an honour, to be so young, when obviously in the room there are people who are a lot older than me, but have done amazing things over a lot of years, when I’ve been doing it for 6 or 7 years.”

Mrs Ann Lesley Priestman also spoke of how delighted she was to receive an award of such prestige: “It’s lovely, it was totally unexpected and a big surprise. It was the community that nominated me so I was especially delighted to receive it.”

Note for editors The BEM was established in 1917, but ceased to be awarded in 1993. The medals were brought back in June 2012 for the Queens’s Diamond Jubilee, when 293 citizens were honoured. This year 270 have been awarded.